Dine In, Dine Out: Scotty’s Takeout is no frills, no fuss 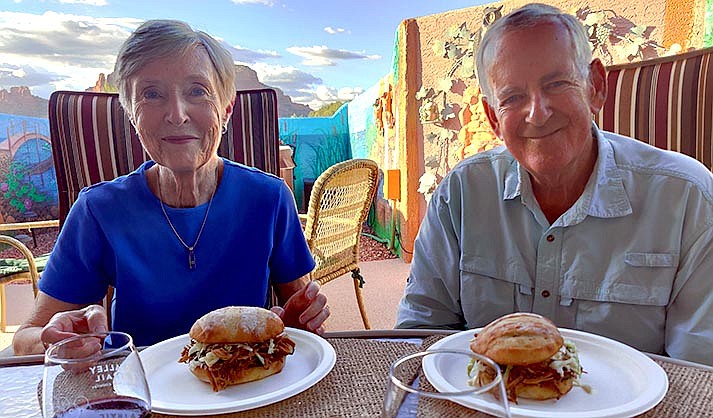 Robin Hubbard and Scotty Coulter have opened a “colorful little mom and pop sandwich shoppe where we can provide our local community with fresh, delicious, affordable options in a fun and friendly manner.”

No frills, no fuss.

“Everything we can is made from scratch with care and attention to ensure a great product, and it is, and served by us, the owners, every time.” That’s quite a statement from Robin and quite a commitment. But these two have been in the food biz all their lives, Robin from Kansas and Scotty from Minnesota. 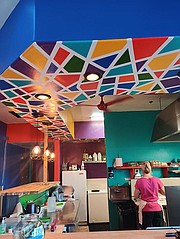 Twenty-five years of marriage have seen them work their way up to GM and executive chef in fine dining establishments, then to running their own Brew Pub in Colorado Springs. Now, eight years in the VOC and daughters having graduated from Red Rock High School has found them empty-nesters with a dream to fulfill.

The Dunnery, happy to see once again a food establishment in Bell Rock Plaza, stopped in almost the first day of operation, July 3. We recognized Robin as a former server at Red Rock Café. We admired the geometric painting of the interior. Robin said she and her daughter did the work, hanging on what, we don’t know.

We met Scotty, the chef, but didn’t have any idea of the couples’ background. We both ordered cheese steak sandwich: Shaved ribeye, grilled onions, provolone American beer cheese, toasted roll. With a glass of wine at home, we proclaimed the sandwiches delicious and generous.

Word was out in the VOC quickly. “Get to Scotty’s.” Our friends, John and Nancy True, met us there for take-out and later shared a table at The Dunnery. This was a repeat visit for the Trues and they repeated their previous order of carnitas sandwiches: Pulled pork, secret slather, summer slaw and house pickles on a buttered toasted bun. Nancy raved about the sandwich bun, which Robin called a Bianca bun, obtained through their vendor.

As we entered that evening, we met our friend John Schupp. John said he walks to Scotty’s every day it is open, and he has nothing but good to report about the service and sandwiches. John had a meatloaf sandwich in his takeout bag and recommended it to Jeff.

Jeff took his word and ordered it: Hot meatloaf, lettuce, tomato, onions, and house pickles on a butter toasted bun. Suzie had the cold cuts sandwich: Pepperoni, capicola, salami, provolone, lettuce, tomato, onion, and house dressing on a toasted roll. It was as good as anyone’s deli hoagie. Robin described the special sauce as zesty vinaigrette with hot pepper relish. We describe it as delicious.

Robin and Scotty did not want their photos taken. They insisted their place is a place where the customers shine.

“We will be bringing on soups, chilis, and specials as we move into the fall/winter season and cannot thank our community enough for the support and enthusiasm we have received, it has truly been amazing.”

Scotty’s Takeout is open Tuesday – Sunday 10am-9pm. Orders can be placed through scottystakeout@gmail.com or by phone 928-862-2553

Many thanks to Robin and Scotty and our friends, Nancy, John T. and John S. (or “Jack,” Robin’s name for him.).

To Your Health and Happiness,

Jeff and Suzie @ the Dunnery