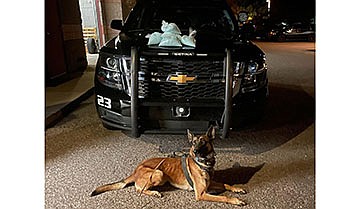 Taking pride in his work, K-9 Otto shows off a yield of drugs picked up during a special operation Aug. 31. (Cottonwood Police photo)

Wednesday, Aug. 31, Cottonwood K-9 officers made one arrest while conducting interdiction operations near the Interstate-17 McGuireville exit. During this operation multiple traffic stops were conducted.

Officers stopped a 2007 Volvo S-60 sedan for a cracked windshield, which was obstructing the driver’s view, according to Cottonwood Police Department. During the stop the driver was identified as 38-year-old Phoenix resident Carlos Ignacio Urias Meza.

K-9 Otto was deployed to conduct a narcotics-sniff, and he reportedly alerted on the vehicle. A subsequent search of the vehicle revealed a duffel bag in the back of the sedan that contained five large plastic bags of blue “M/30” pills, according to police. They confirmed it to be approximately 50,000 fentanyl pills with a weight of approximately 12 pounds.

There was also a usable amount of methamphetamine located in the vehicle and additional property indicating these dangerous drugs were being trafficked for sale, according to police.