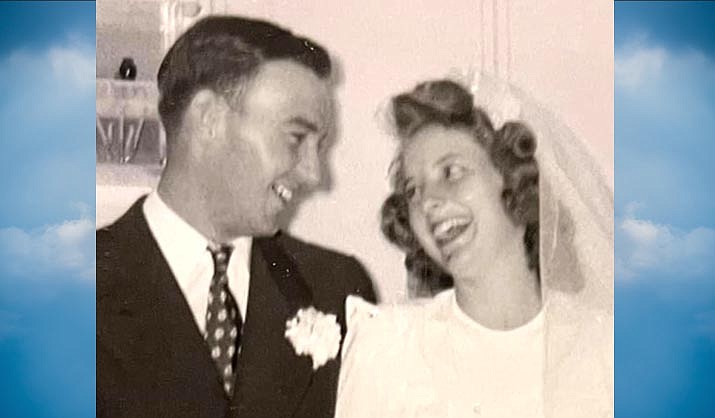 
Our family said farewells to Preston William James, OUR beloved patriot and patriarch of 97 years. We grieve and we mourn his loss. He was our patriarch, not only in title, but in a life of deeds.

His passing follows the departure of our matriarch, his wife of 73 years, Ruth F. (Clark) James. The pair met and married on July 3, 1948, in Cottonwood. He was our real-life hero - father, grandfather, great-grandfather, uncle, great-uncle and great-great-uncle.

Patriarchs and matriarchs are titles that are not inherited but earned. Preston was most deserving of that. He walked the walk and created a lasting legacy.

Preston was the longest surviving member in the James family of Abinadi (Abe) and Amy (Fuller) James. The family settled in the Verde Valley in 1919, who were all raised through a tradition of love of faith, family, the outdoors, and a deep-rooted tradition of hard work. The ancestry of Abe and Amy have origins in Arizona that date back to the families of Amy Fuller who was born in Pine, Arizona on June 9, 1898. Abe was born in Colonia Diaz, Chihuahua, Mexico in March of 1898.


Preston was particularly close with his sister Lucille and her children: William James Edens, Judith Lucille Edens, and Mattie Diane Edens. Over the years he treasured his relationship with William Edens and his wife Karma (White) Edens. He particularly enjoyed the gourmet meals that William would prepare for Preston. William would frequently travel from Utah to visit with Preston and Ruth to do repairs to their home and serve up great food.

William participated in many hunting trips with Preston, some of which went to Wyoming and to Kaibab Forest at the north rim of the Grand Canyon.

The James, Fuller, and Edens families have had a presence in the Verde Valley for over 100 years and in central Arizona communities of Pine and Payson for over 140 years. The family was 6 generations of family members born in Arizona.


How do you encapsulate 97 years of life in a few paragraphs? Truth is you don’t - you can’t. In a sense it is an impossible task but here we are, and it is our honor to share his journey with you.

Preston W. James was born in Clarkdale, Arizona, on July 6, 1925. He was born as the youngest child of Abe and Amy (Fuller) James. The family’s eldest son was Walter James and sister was Lucy Lucile (Edens) James. His parents were lifelong members of the Church of Jesus Christ of Latter-day Saints. As was Preston. As an adult he served in the bishopric of the LDS Church for many years.

Much of his life was impacted by his youth in the beautiful and plentiful environment of central and northern Arizona. In the 1920’s he developed a love for the outdoors - hunting, fishing, camping and hiking were some of his great loves. He was active in mentoring many youths in the Boy Scouts of America program by sharing his vast skills and knowledge of the outdoors.

He was inducted into the United States Navy during WWII in October of 1943. He served in the south China Sea, Asiatic Theater, and with the amphibious forces. Preston was assigned to the USS APc-25 vessel which had 3 officers and 22 enlisted sailors. The Apc-25 was a personnel carrier that had 66 beds for transporting personnel. He was MoMM3c when he was honorably discharged from the Navy in April 1946. His campaign medals included WWII Victory Medal and the Philippine Liberation medal. He was a shellback having crossed the equator.

Preston was a profound inspiration to his grandchildren, in that his granddaughter, Lacey Anne (James) Fager, enlisted in the US Navy in 2009 as a Gunner’s mate. She served on board a ballistic missile defense Arleigh Burke-class destroyer, USS Benfold (DDG65), and sailed many of same seas and oceans that her grandfather did in WWII. They shared a unique bond of dedicated service to our country.

Upon his honorable discharge from the Navy, he returned to Cottonwood and began his career of 35 years at Arizona Public Service by completing the AFLCIO apprentice electrician program. Through this program he served as a journeyman that would climb the highest of wood towers installing high powered voltage lines throughout Arizona. Ultimately, he went into management, supervising the construction of substations throughout the state and leading the safety programs before retirement in Cottonwood.

He was a mechanical genius; we would be amazed at the depth and breadth of his abilities. We would say that he could fix anything, anytime, anywhere. He did just that throughout his lifetime.

Upon Preston’s retirement he moved from Phoenix in 1986 to be close to his eldest son Preston Abe and his family. They lived just a few blocks from one another, on Quail Run Road, and Preston W. and Ruth’s home became the destination for their grandchildren; Heather, Stoney and Lacey to spend countless weekends at grandma and grandpa’s home, where they were truly loved and fed so very well.