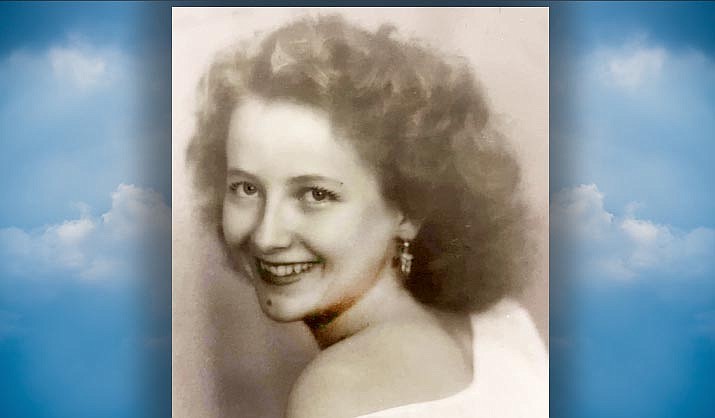 She was born at 8:30 PM on the 18th day of October 1929 in a farmhouse in Hotchkiss, Rodgers Mesa, Colorado. Ruth was the daughter of Isaac Calvin Clark who was born in Crested Butte, Colorado in 1894. Her mother was Nina Victoria Kurts who was born in Tescott, Kansas in 1896.

Ruth moved to Clarkdale, Arizona in 1931. Ruth’s mother had a sister, Murley Mazza, that lived in Clarkdale and informed her parents that there were jobs available during the depression. Her dad went to work for the Miller Wholesale Company.


Ruth went to grade school and high school Clemenceau/Jerome and participated in the Drum and Bugle Corps and was a member of the Glee Club. She was in the first graduating class of Clemenceau High School. During her senior year in High School, she worked as a secretary for K. Norton, a lawyer in Cottonwood.

Upon graduation she met her husband to be, Preston W. James, who had recently been honorably discharged from the US Navy.

Ruth and Preston married in Cottonwood, Arizona on July 3, 1948, at the Church of Jesus Christ of Latter-day Saints. Preston went to work for Arizona Public Service (APS) company in 1950 and was relocated to the hydroelectric power plant in Childs, Arizona. They were eventually transferred to Prescott, Arizona where they lived with their two sons for 5 years, then to Phoenix, Arizona. Where Ruth lived until 1986.

In Phoenix Ruth raised two boys, as they grew older, she decided to go back to work. She took a position at Glendale Community College in Glendale, Arizona as the assistant to the Dean of Women at the College. She was involved in counseling and supporting the academic success of the women at the college in every manner that she could do so. She had an emphasis on the lasting value of education which inspired her son Preston Abe James to attend Glendale college at the same time she worked there, where he graduated with honors and a 3.98 GPA and was accepted to numerous universities, including Columbia University in New York, and Yale, eventually selecting the University of Colorado, Boulder.

She also taught a Girl Scout Troop and joined the Ladies Auxiliary of the IBEW of America. She was involved in the LDS Relief Society and also organized the church’s Drama Programs for many years.


She was an excellent artist and created paintings in different styles - landscapes, contemporary art, and realism. Our family has preserved her works for future generations. When she experienced a passion for genealogy, she turned her keen focus to the pursuit of research and documentation of the extensive family tree back to the 1200s in Europe.

Our family has also preserved these lines of decent in a book she authored, titled “Our Family,” over the course of 40 years. She taught herself how to operate a Macintosh computer to aid her efforts. Her work spans two volumes and over 400 pages.

Upon Preston’s retirement she moved from Phoenix in 1986 to be close to his eldest son Preston Abe and his family. They lived just a few blocks from one another, on Quail Run Road, and Preston W. and Ruth’s home became the destination for their grandchildren, Heather, Stoney and Lacey to spend countless weekends at grandma and grandpa’s home, where they were truly loved and fed so very well.

Ruth so loved to be with the grandchildren and great-grandchildren that she bought a Nintendo gaming system and became quite good at it, beating the grandchildren and great-grandchildren on a regular basis. She would also purchase the latest games to share with them, they would spend many hours together with great laughter emanating from the gaming room. Ruth was an avid reader and always found ways to occupy her time after settling down in Cottonwood, Az. She loved her dog, Sheila, and enjoyed spending time with her neighbors. Not only did she trade the local newspaper with them, she also traded books with her dear girlfriends that lived next door.


She was quick to love and forgive. She was devoted to her husband, family, and the Lord. Her motto was to “never go to bed angry.” Ruth loved having her grandchildren around her and would take them with her on road trips across the country and on hunting trips. Ruth also loved the little things in life. She always filled her bird feeder for the local quail and birds, she loved her apricot tree and her tomato plants, and she loved the small trinkets that she had scattered around her home that were gifts from her loved ones.


She would take long drives with her granddaughter Lacey in her Jeep Cherokee playing music so loud they blew out the speaker in the Jeep. She loved listening to her grandkids music.

She provided a physical, spiritual and emotional commitment to her grandchildren. Ruth helped her grandchildren gain a sense of family history and provided a vital connection to the past. Like no one else, she would pass on important family traditions and life stories that her grandchildren not only relished as youngsters but have grown to appreciate even more over time as they matured into adulthood. She had an adoration and unconditional love and joy in one another’s life journey.