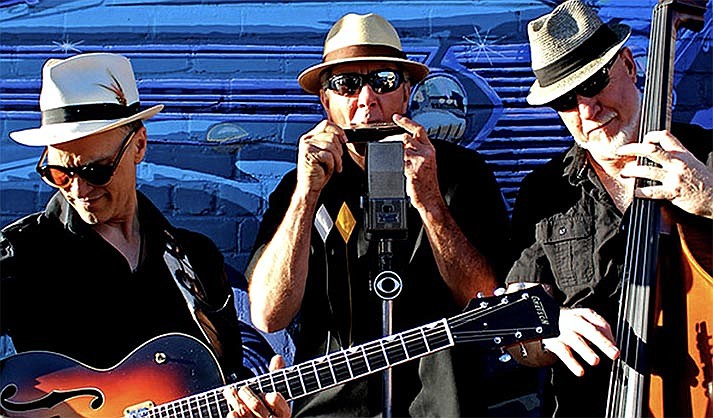 On Saturday, September 10, from 6 to 10 p.m. Mother Road Trio entertains with a power-house ensemble of seasoned professional, musicians.

Their style is as diverse as Rt. 66 itself, and they bring a plethora of great music to every stage they grace.

Sammy McRae is top dog on harmonica playing a crazy stream of notes on the magic blow harp that awes.

With a genuinely soulful voice, and the ability to get a crowd up on their feet begging for more, this quick-witted showman, has been a “Blues Ambassador” in the Southwest for over 20 years, pleasing audiences far and wide with his engaging stage presence.

Mike Shiner, the band’s bass bombardier and vocal powerhouse, is classically trained, breaking hearts and taking names with his seismic vocals and charm. With a degree from Berklee College of Music, Mike holds down the bottom, and brings both swagger and academic polish to this dynamic trio.

Guitarist Larry Czarneck started out in the explosive music scene in Chicago, then careeninned off to LA, and eventually landed in Flagstaff — taking the RT. 66 town by storm. Larry’s virtuoso guitar playing drives the trio’s infectious rhythm with precision and panache. Larry has cultivated a unique blend of bluesy licks and tricks thrilling crowds with his impressive playing and singing, along with his expressive stage capers.

Although formally trained with jazz and classical music degrees, his melodic style has always been influenced by the sounds of the Hawaiian slack key guitar. In addition to performing extensively in concert and at music festivals. Patrick Ki has released nine instrumental guitar and ukulele CD’s, in popular styles, including his latest album, “Kailua Days.”

Miller is romantic Latin guitarist, and a local favorite. After traveling throughout France, Italy, England, and Ireland, he learned and experienced each nation’s culture and beautiful music. It was when he arrived in Spain that he fell in love with the art of Flamenco guitar. Best known for his Latin Jazz music, Miller has written numerous songs and has many albums.

He has also written music for film and television.

Zang, his accompanist, is a percussionist and multi-talented drummer who really brings the beat to Sound Bites Grill. These two set the perfect mood to chill-out, as they fill the air with World Beat & Brazilian Groove Fusion – playing original songs, as well as popular covers you will know and love.

The Eric Miller Band is talented trio that takes you through original Latin music to Sting, playing the songs we have grown to love with newfound fervor and interpretation. This band specializes in providing the kind of dance music you just can’t resist moving to.

On Sunday, Sept. 11, it’s Jazz & Juice Sunday, featuring, Patrick Ki, playing from 5 to 8 p.m. Dinner will be served during that time.

Sound Bites Grill is located at the Shops at Pinon Point adjacent to the Hyatt in Sedona. For more information please visit SoundBitesGrill.com or call 928 282 2714. Tickets can be purchased via Website.