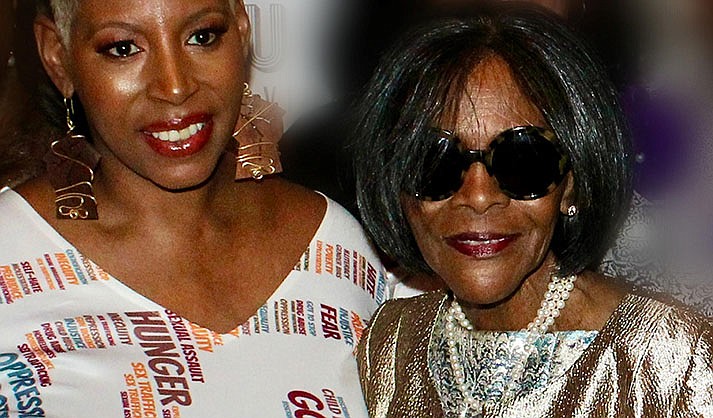 This year Sedona City of Peace is celebrating its 10th Anniversary and two powerhouse creators have landed in Sedona as part of Arts for Peace Week: Musician and composer Adrienne Torf and actor, activist and fashion designer Erika Lucille Ewing.

Both of these extraordinary women have a lifelong history of using the arts to open hearts and minds using their voices to engender in others a profound sense of community that connects us all.

Adrienne is co-creating the performance of “The Awesome Difficult Work of Love” at the Sedona Arts Academy and Erika will be facilitating a special project at Sedona Red Rock High School utilizing fashion activism in the arts classes. Both will also be participating in various activities throughout the week.

Adrienne Torf toured and recorded with numerous artists, including political folk singer Holly Near, R&B singer Linda Tillery, renowned Canadian songwriter Ferron, composer and flutist Kay Gardner, and Olivia Records headliners Cris Williamson and Meg Christian, including their Carnegie Hall performance and live recording. Her piano and synthesizer work, compositions and arrangements appear on more than 20 commercially released albums, including her own two solo albums or original works for piano and synthesizers, “Brooklyn from the Roof” (1986) and “Two Hands Open” (2003).

She says the project “The Awesome Difficult Work of Love” “leads us to understand that enlarging our circle of trust, overcoming fear of those not like us, and recognizing our common striving for a world in which our connections to others are of paramount importance to attaining global peace.”

Erika Lucille Ewing refers to herself as an “artivist.” She might best be described as a force to be reckoned with and her impressive background spans multiple disciples. She has performed in plays, radio, film, and television. Her work as an actor, writer, director, and producer of social-issued-based dramas in the classroom garnered much attention, and she received accolades in the applied theater arts and education field. She has worked for New York University and The City University of New York’s Creative Arts Team— Applied Theater Arts and Education Program. In 2003, she was invited to be a Guest Lecturer at NYU Tisch School of The Arts; and from 2008 to 2009, she also served as Adjunct Professor at CUNY Graduate Center and taught literacy, drama, and dramatic writing for NYU and City College Students.

Determined to make a difference, in 2018 founded Got To Stop LLC – a social impact consulting company that raises awareness about social injustice through fashion, the arts, education, and advocacy.

Erika says of her work, “Through fashion activism, we elevate social consciousness and spark courageous conversations about the social issues we must stop and change to achieve world peace.” She continues “It is my vision of fire! Fire to change, fire to warm, fire to heal, fire to melt our hearts and souls for the good of humankind. We all deserve peace, and it begins within me.”