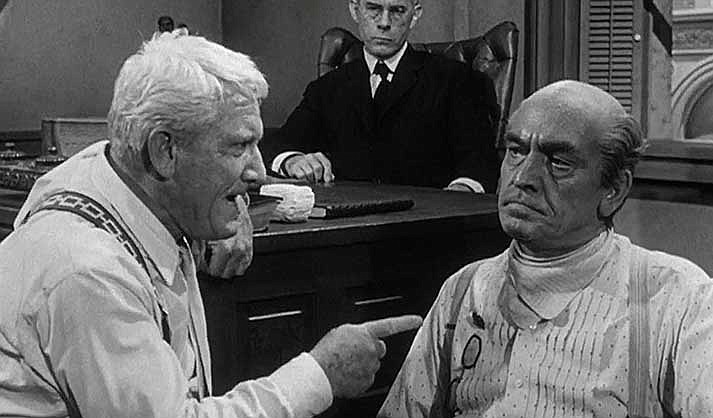 Lions of stage and screen, Spencer Tracy (left) and Fredric March starred in 1960s "Inherit the Wind" (with Harry Morgan as the judge). (Courtesy image)

Democrats of the Red Rocks (DORR) is sponsoring the showing of “Inherit the Wind” at the Sedona International Film Festival’s Mary D. Fisher Theatre on Friday, Sept. 16, at 7 p.m.

The classic 1960 film “Inherit the Wind” is a fictionalized version of the famous 1925 Scopes “Monkey Trial” that challenged a Tennessee state law banning the teaching of the theory of evolution in public schools. It stars Spencer Tracy and Fredric March, both two-time Oscar winners, along with Dick York and Gene Kelly. During an early trial scene there is a speech by defense attorney Henry Drummond (Tracy) that unfortunately has resonance today.

The actual so-called “Monkey Trial” of 1925 put a high school teacher named John T. Scopes on trial for violating a state law prohibiting the teaching of any theory that denied the biblical account of divine creation. Charles Darwin’s theory of evolution was also on trial. Two of America’s most famous lawyers contested the case; Scopes defended by the legendary Clarence Darrow (fictionalized as Drummond), and the prosecution led by three-time presidential candidate William Jennings Bryan (renamed Matthew Harrison Brady and played by March in the film).

Almost 100 years since the Scopes trial, America is once again dealing with efforts in many states to reject scientific theories and the banning of books in schools and libraries.

The film version of “Inherit the Wind” was based on a 1955 stage play by Jerome Lawrence and Robert Edwin Lee. Directed by Stanley Kramer, the film earned four Academy Award nominations, including Spencer Tracy for “Best Actor.”

There will be a panel discussion and Q&A session following the film featuring DORR Board members Stephen Hanks, Kathy Kinsella and local attorney Mik Jordahl.

Tickets for this special event are $12 ($9 for SIFF members). For tickets and more information, please call 928-282-1177. Both the theatre and film festival office are located at 2030 W. Hwy. 89A, in West Sedona. For more information, visit SedonaFilmFestival.org.

Democrats of the Red Rocks is an all-volunteer organization serving Sedona, the Village of Oak Creek, and the Verde Valley communities that has championed voter rights since 2003. Among DORR’s events are a monthly “Zoom Breakfast,” featuring Sedona-area and Arizona political figures and issues, and a monthly “Zoom Film Club,” where attendees engage in lively discussion. DORR welcomes all independent-minded citizens and volunteers at its office located at 105 Roadrunner Drive, Suite 2A in West Sedona. For more information on DORR membership, programs, and events, visit democratsoftheredrocks.org or email at info@democratsoftheredrocks.org or call 928-212-1357.