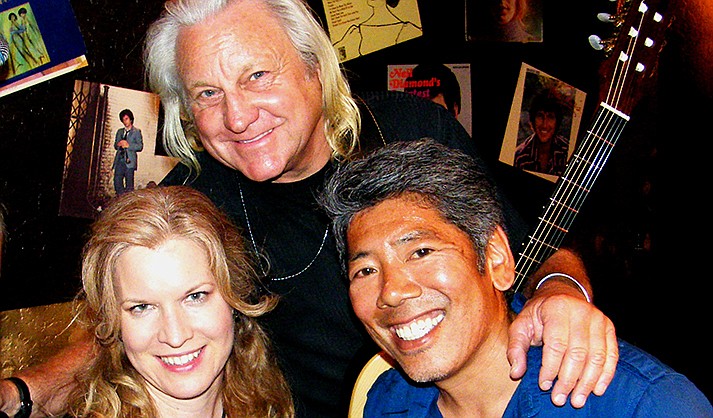 The band’s versions of classic pop/rock tunes by artists such as the Eagles, the Beatles, Fleetwood Mac and Sting along with well-crafted originals and spicy Latin jazz have won them an enthusiastic fan-base on the local music scene.

In addition to having busy solo recording and performing careers, the members of this band come together to create a musical synergy full of frolic and zing.

Robin Miller’s powerful blues and rock-based guitar playing is full of fiery solos, honed by over fifty years of professional experience. Add his rich and bluesy rock-singer vocals and the crowd gets in a tizzy.

Patrick Ki is a formally trained classical and jazz guitarist who brings a more lyrical-based guitar sound to the ensemble, influenced by his Hawaiian island upbringing. He drives a strong and deep guitar groove to propel the group and Patrick sings as well, also adding wry and silly humor as the group’s emcee.

Singer Susannah Martin, adds her fine feminine flair to the band. She wails on R&B or Rock tunes, delivers a touch of sultry jazz improv and sings fluently in Brazilian Portuguese and Latin hits.

Martin also provides a strong back beat on the “Cajon” or (beat box) to help drive the band.

Susannah is known locally as one of Sedona’s “Dynamite Divas,” and is also Musician for SUUF (Sedona Unitarian Universalist Fellowship) and a popular vocal coach in the area.

On Friday, Sept. 16, from 6:30 to 9:30 p.m., Sammy Davis takes the outside patio stage, dancing and singing his way into the hearts of his audience as he belts out one Classic Rock and Motown hit after another.

Saturday, Sept. 17, from 6:30 to 9:30 p.m. Jerry McFarland takes his turn on the beautiful Bella Vita Ristorante outside stage where under the patio lights he plays and sings his heart out.

It’s going to be a great weekend of live music coming up so make your reservations early and get ready to rock.

Bella Vita Ristorante is located at 6701 West State Route 89A. For reservations and specific directions to the restaurant visit BellaVitaSedona.com or call 928-282-4540.