Tumbledown House breaks all the rules 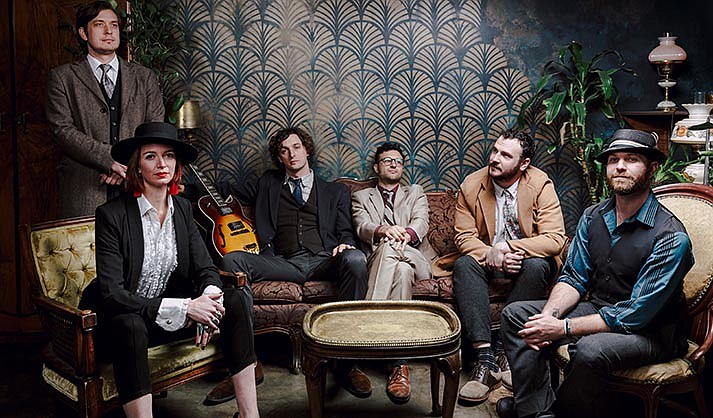 Clever stories told in song. A six-piece band, with an up-tempo feel that can carry you to the Jazz Age on the trill of a clarinet, bounce you back to folk-rock with a twanging guitar, and conjure a Big Band feel on a singer’s purr. Join us Saturday night, Sept. 17, at 7 p.m. when the amazingly versatile and former Prescott-area band Tumbledown House cuts loose at Yavapai College Performing Arts Center.

Modern speakeasy music. Gritty saloon jazz. Tom Waits in a cocktail dress. Tumbledown House moves seamlessly between so many musical genres, the only common description for them is “amazing.” Whimsical, story-based songs, delivered by velvety vocalist Gillian Wolfe, anchor a sound that varies from vintage jazz to Big Band swing to Blues, tango, and pop. “We say we play modern speakeasy music because we don’t know what that means.” Wolfe explains. “We’re influenced by a variety of music, and you’re probably going to hear all of them.”

Tumbledown House’s Saturday night PAC performance represents a homecoming, of sorts. “We do have some history [in Prescott,]” guitarist Tyler Ryan Miller told the Prescott Daily Courier in 2018. Miller and band members spent 2008-09 performing at local spots, including The Raven and El Gato Azul, before moving on to Portland and meeting Wolfe.

Tumbledown House challenges more than just musical barriers. In an homage to the band’s danceability and trademark informal style, the YCPAC concert will break the ‘fourth wall’ and invite audience members up onstage to cut a rug to their one-of-a-kind sound.

Since then, the band has since become road warriors, opening for acts like Brandi Carilile, Crooked Still, and Keller Williams, recording two critically acclaimed albums and performing over 900 shows in 35 states nationally and abroad.