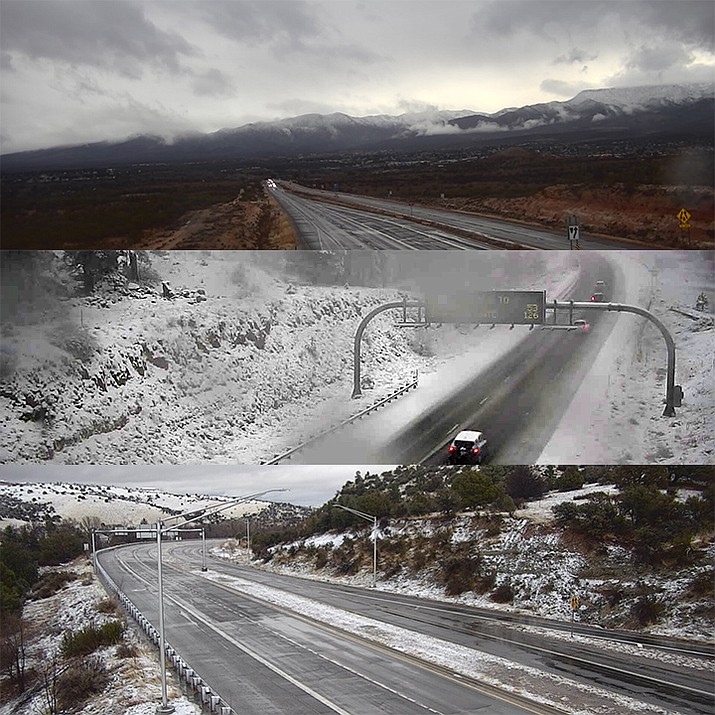 ADOT cameras captured the weather and traffic at 4:45 p.m. Sunday simultaneously in Cottonwood, Flagstaff and Prescott areas (from top to bottom).

Flagstaff remains under a winter storm warning until 8 a.m. Monday, according to the National Weather Service. Travel will be very difficult to impossible this afternoon and lasting into Monday. Patchy blowing snow could significantly reduce visibility.

Rock fall was reported on Interstate-17 in the canyon south of Camp Verde.

In the Verde Valley, expect showers to continue overnight as the low temperature drops to 35 with winds up to 10 mph.

Monday, continued rain is expected mainly before 11 a.m. Overall, the day will be partly sunny with a high near 47 and a 60% chance of rain. The nighttime low will be around 32 as the chance of snow showers increases to 80%. Up to a half-inch of snow may fall in the Cottonwood area.

Tuesday, any snowfall is expected to turn to rain after 8 a.m. Chance for rain during the day is 80%. Overnight, expect mostly cloudy skies and a 20% chance of showers and a low around 32.

Wednesday, too, is forecast to be mostly cloudy but without precipitation. The high will be near 49 while the nighttime low is again expected to be 32.