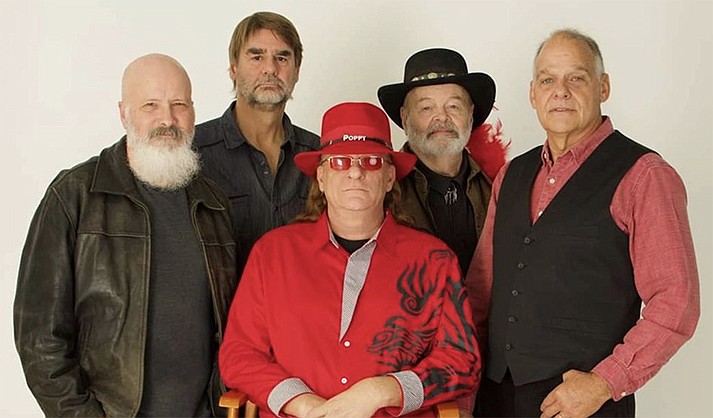 It’s a weekend of Rock and Blues at Sound Bites Grill with Poppy Harpman and the Storm; and rockers Scandalous Hands, letting it all hang out.

They say the Blues is the kind of music that makes you glad and sad at the same time. On Friday, Jan. 20, from 6 to 9 p.m. its Poppy Harpman & the Storm, storming the stage, featuring front man and harmonica virtuoso Poppy Harpman, backed by lead guitarist Randy Magnuson, keyboardist Jeff Lucas, bassist Randall Hakke and drummer Mark Ulmer.

Poppy’s vocals are the personality and power that drives the band’s hard-hitting songs. On stage his energy oozes off the stage captivating every member of the audience with his mastery of the harmonica.

He has developed a reputation for ‘getting crazy’ and devastating audiences with his high-energy style of Rhythm & Blues and rock ‘n’ roll, which showcases Poppy’s innovative harmonica playing.

He puts on a show to be remembered and its pedal-to-the-metal the moment he hits the stage.

Every member of his band is a powerhouse musician and performer in their own right, guaranteed to deliver a show everyone will remember long after it’s over.

If you love the blues, this is one show you don’t want to miss.

This four-piece band plays contemporary versions of rock standards, taking them to unfamiliar new heights as they jam out into the stratosphere.

Their live performances are impeccable, and their coverage of classics is unique and inspiring.

Band members include Troy Schilperoort on keyboard; Adam Haar on guitar and lead vocals; Dennis Messenger on bass; and Shawnee Snaketail on drums.

Scandalous Hands continues to grow, debuting new material with each performance, unleashing an explosive inventiveness in their covers of familiar classics.

What makes this band stand out are the sharp harmonies that ring over the music, so one can hear every word of the songs as they were intended to be listened to.

The band exhibits excellent volume control and can shift from a whisper to all-out-load hard rock in an instant.

Every member adds to the mix, creating a sound bigger than the sum of their parts.

Sound Bites Grill is located at the Shops at Piñon Point adjacent to the Hyatt in Sedona. For more information please visit SoundBitesGrill.com or call 928-282-2713. Tickets can be purchased via their website.