‘Made in Sedona’ film presentation Jan. 23 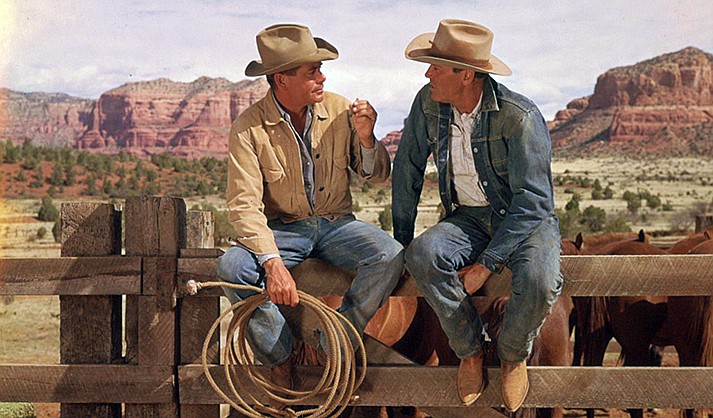 Santa Fe-based film historian and writer, Jeff Berg will return to the Mary Fisher Theatre on Monday, Jan. 23 at 4 p.m. to present film clips from movies made in and around Sedona, appropriately titled ‘Made in Sedona,’ presented by the Sedona International Film Festival.

The making of movies in Sedona- both features and short films, probably started in 1923, when the silent film, ‘The Call of the Canyon’, starring Richard Dix and Lois Wilson was shot at least in part at Red Rock Crossing. A full feature, 70 minutes in length, the film was thought to be lost until a copy was found in the Russian film archives and a copy was donated to the Library of Congress in Washington DC. It was directed by Victor Fleming, who also did ‘The Wizard of Oz’ and ‘Gone With the Wind’.

Since then, over 200 films, long and short have been shot in the Sedona area — some forgettable, others being outstanding.

In this presentation, film historian, Jeff Berg, will present clips from sixteen of the films, starting with ‘Call of the Canyon’ and continuing on to 2011’s overlooked feature ‘Sedona’. Included in the show are clips from ‘Der Kaiser’, which has an unusual connection to Nazi Germany and ‘Jerome’, a quite forgotten tongue-in-cheek comedy released in 1998.

Following each clip, Berg does live narration, offering tidbits and trivia about each movie. Audience participation is encouraged and welcome.

Berg is a Santa Fe, NM-based freelance writer, film reviewer, and New Mexico film historian. He was also a board member and event planner for the Mesilla Valley Film Society in Las Cruces, NM for 12 years and the Assistant Manager of the Jean Cocteau Cinema in Santa Fe.

As a writer, Berg’s work has appeared in numerous regional publications including New Mexico and True West Magazines, Film Comment Magazine, Desert Exposure (Silver City, NM), and the Santa Fe New Mexican. He recently sold a book on the history of New Mexico-made movies as well.

“Made in Sedona” will be presented at the Mary D. Fisher Theatre Monday, Jan. 23 at 4 p.m. Tickets are $15. For tickets and more information, please call 928-282-1177 or visit SedonaFilmFestival.org. Both the theatre and film festival office are located at 2030 W. Hwy. 89A, in West Sedona.