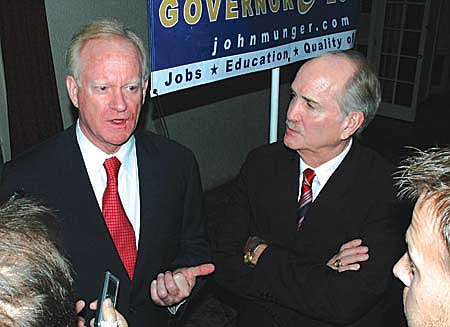 Capitol Media Services photo by Howard Fischer
Former Gov. Fife Symington, left, answers questions Thursday about his decision not to seek his old job back but instead endorse Republican contender John Munger. Symington said the decision was unrelated to any fears he had that foes would make an issue of his 1997 criminal conviction on financial fraud charges, a conviction that was subsequently overturned.

PHOENIX -- Trailing badly in one recent poll, former Gov. Fife Symington on Thursday gave up on the idea of getting his old job back and threw his support behind GOP contender John Munger.