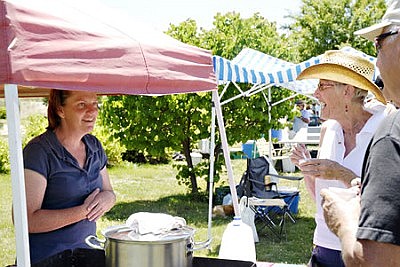 The Cornville Community Association organized the 2nd Annual Chili Cook-Off Competition in Windmill Park on Saturday. The fact that it was 102 degrees out may have deterred some folks from coming out for the spicy dish, but overall the event was a success that raised money for charity and brought the community together in a beautiful setting. The Cook-Off had competitors arriving from around the state, and Cornville too, to cook up both traditional red chili as well as anything goes, People's Choice chili. Winning the Red chili competition earned the cook points to qualify for the International Chili Cook-Off being held in Terlingua Texas.