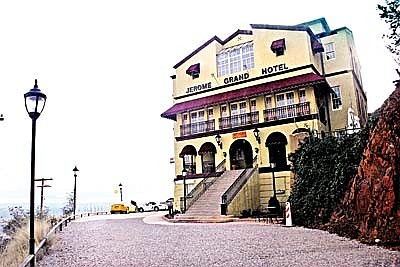 The Jerome Grand Hotel is well known as a haunted structure. Over the years, the Altherr brothers, Robert and Larry, have had a book at the front desk of the hotel for guests to enter descriptions of their own personal experience with the hotel’s ghosts. “There is an entry at least every other day,” said Robert. “It will be that somebody heard something or saw something.” Some of the common experiences include orbs caught by cameras, or mist, or shadows – including, sometimes, a face. Other guests have reported seeing two red dots close together that appear to be floating up or down a stairwell or hallway.

The Jerome Grand Hotel may be the most haunted building in the mountainside town known as "Ghost City."