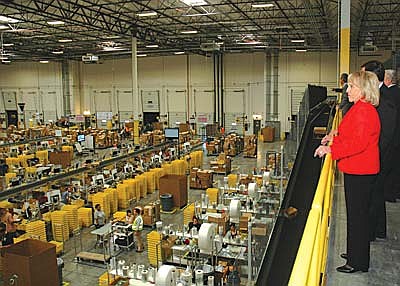 Gov. Jan Brewer tours one of the three Amazon distribution centers in the state on Thursday after the company announced it would build a fourth, in Phoenix. (Capitol Media Services photo by Howard Fischer)

PHOENIX -- Someone is going to have to address the issue of whether Arizonans -- and others -- should be charged sales taxes on purchases they make online, Gov. Jan Brewer said Thursday.But she's not sure that someone should be the state.The governor's comments came after she toured one of three distribution centers that Amazon.com already operates in Arizona and as the company said it plans to open a fourth, in Phoenix.