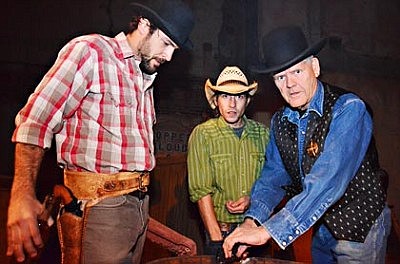 Blending history, entertainment and the paranormal, Jerome staged its annual Ghost Walk for the 10th year running on Friday and Saturday evening. This year the Ghost Walk offered vignettes that revolved around the founding of the Jerome Historical Society, presented by phantoms from the town's colorful history. Attendees at the walk were taken to locations well known, where events from the past were unveiled by the ghostly narrator, illuminating their significance in Jerome lore. No Jerome Ghost Walk would be complete without an old West gun battle, and this year's shootout took place in the ruins of the Bartlett Hotel, where notoriously successful bootlegger Matt Ogulin, played by David McClellan, met his fateful end in a battle with federal agents...or so the story went on this evening. Members of the Jerome Historical Society produce the Ghost Walk each year.