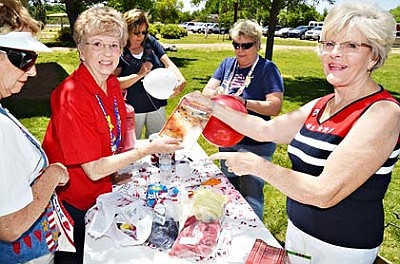 The austere Memorial Day Observance, "Lest We Forget," took place on Saturday, May 25, at Windmill Park in Cornville. American Legion Post and Auxiliary 135 was once again host for the ceremony. Sedona Brownie Troop 717 performed their own Presentation of Colors, including the Girl Scout flag, and led the Pledge of Allegiance. Post 135 Chaplain Tom Gore performed the Invocation and Sherie Mercier sang the National Anthem, and later, God Bless America. Bagpiper Michael Donelson opened and closed the ceremony, his mournful melodies a solemn reminder of those who gave their lives serving our country. The Post 135 Auxiliary served refreshments and later released balloons with the names of fallen soldiers written upon them to commemorate the occasion. American Legion Post 93, Camp Verde, performed Presentation of Colors at the Memorial Day Observance.Guest Speaker for the event was Lt. Col. John Rosenthal, who spent over 32 years serving in the US Air Force, Air Force Reserve and New Jersey Air National Guard and is currently a Commander in the Civil Air Patrol. Rosenthal offered recollections and anecdotes from his time in the military and remembrances of those lost in service. He also spoke of the importance of organizations such as the Civil Air Patrol, which involve and serve the community at large.