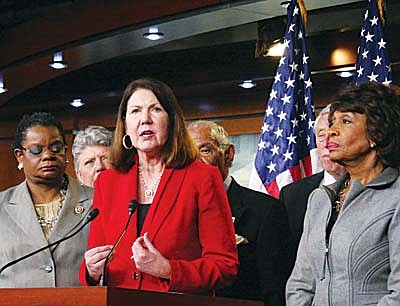 Rep. Ann Kirkpatrick, D-Flagstaff, represented the sprawling 1st District once before, but lost a previous re-election bid. Elected back to the seat in 2012, she already has several GOP challengers for the 2014 campaign. (Cronkite News Service photo by Michelle Peirano)

WASHINGTON - With a year until the next election, Democratic freshmen in three competitive Arizona congressional districts are continuing to stockpile cash for their re-election bids, according to the latest campaign finance reports.The Federal Election Commission said Reps. Kyrsten Sinema, Ron Barber and Ann Kirkpatrick had each raised at least $280,000 between July 1 and Sept. 30. No other member of the state's congressional delegation raised even half that amount during the period.