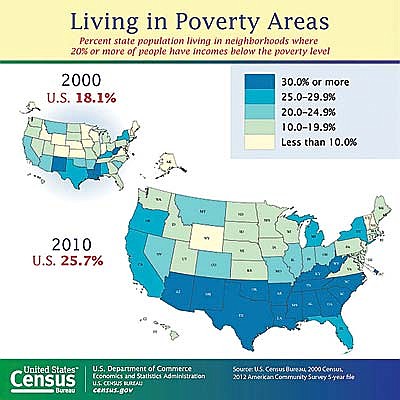 Arizona saw an increase between 2000 and 2010 in the percentage of residents living in “poverty areas,” or those tracts where more than 20 percent of the population is below the poverty level. The state’s shift was part of a national trend during the decade. (Map courtesy the U.S. Census Bureau)

Census: Number of Arizonans living in 'poverty areas' jumped in 2010

WASHINGTON - The number of Arizona residents living in concentrated "poverty areas" grew significantly in the first decade of the century, according to a new Census report.From 2000 to 2010, Arizonans living in poverty areas - census tracts with poverty rates of 20 percent or more - rose from 24 percent of the state's residents to 33.4 percent.