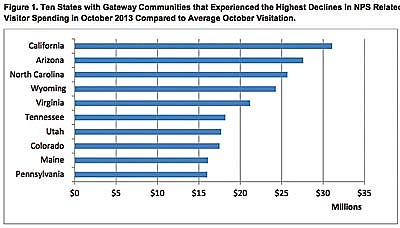 WASHINGTON - Arizona saw a $27 million drop in spending at its national parks during October's partial federal government shutdown, with $17 million in losses at Grand Canyon National Park alone, according to a new report.The Department of the Interior report released Monday said that Arizona had the second-highest losses in the nation for the shutdown, trailing only California, which lost $31 million. The losses were based on park spending in October 2013 compared to the average park spending for the same month over the preceding three years.