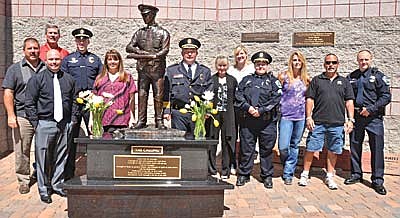 COTTONWOOD-- Cottonwood Police and their many friends and supporters unveiled the Law Enforcement Heroes Statue Friday. Former Flint, Mich., Police Lieutenant Jim Iacovacci and sculptor Neil Logan created Law Enforcement Creations to honor those fallen or served in the line of duty."I had helped the police chief in Flagstaff do fundraising for a statue there and Chief Fanning knew about it and knew I was involved and wanted something similar here," said Iacovacci.