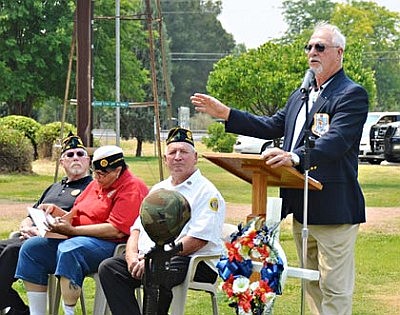 American Legion Post and Auxiliary 135 held their annual Cornville Memorial Day Observance on Saturday, May 24, at Windmill Park. Post 135 Chaplain Tom Gore performed the Invocation and Benediction following the Presentation of Colors by the Post 135 Color Guard. Sherie Mercier sang the National Anthem, and later, God Bless America. Bagpiper Michael Donelson opened and closed the ceremony; his mournful melodies a solemn reminder of those who gave their lives serving our country. The Post 135 Auxiliary served refreshments following the ceremony. Guest speaker for the event was Col. Thomas G. Lockhart, USAF, retired, who served as a combat fighter pilot in North Vietnam from August 1964 until June 1966 and from February 1971 until March 1972 in Laos, Cambodia and North Vietnam. He later became a flight instructor; while at Moody AFB, George W, Bush was one of his students. He was decorated with numerous service medals, including the Silver Star, Legion of Merit, four Distinguished Flying Crosses and many more. Lockhart spoke of the need for more young people to become engaged with the veteran population and armed forces, and later lamented the current problems at the Veterans Administration.