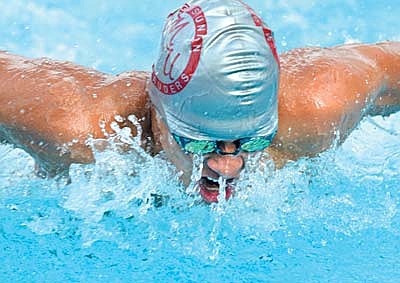 Mingus junior Sean Williams said he could did better than how he did last meet. VVN/ Vyto Starinskas

Mingus swimmers look to progress early in the season

The sport of swimming is an individual sport. But there is still a team aspect to it. The Mingus Union High School swimming team is hoping to be good in both this season. The Marauders have had two meets so far. The first was at home against Flagstaff High School and Arete Preparatory Academy. The second was against North Pointe Prep and Bradshaw Mountain at Bradshaw Mountain. Head coach Gretchen Wesbrock said she thought her team performed well.