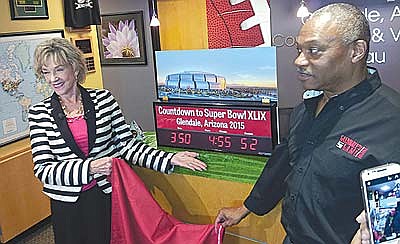 Sherry Henry, executive director of Arizona Office of Tourism, and Terry Williams, sales and service manager for the Glendale Convention and Visitors Bureau, address a February 2014 news conference counting down to the 2015 Super Bowl in Arizona. (Cronkite News Photo by Jordan Young)

A question of economic impact: What if Cardinals make Glendale's Super Bowl?

PHOENIX - Come February, thousands upon thousands of fans and their wallets will flock to the Valley for Super Bowl XLIX and activities surrounding it, buying hotel rooms, meals and more in the process.But what becomes of the estimated $600 million economic impact from all of those visitors if the Super Bowl becomes a home game for the Arizona Cardinals, whose fans don't necessarily have to travel?With the team at 3-0, the postseason certainly is a possibility. And a trip to the Super Bowl would make the Cardinals the first team to play the big game in its home stadium. The closest has been the San Francisco 49ers, who played Super Bowl XIX in Stanford Stadium.