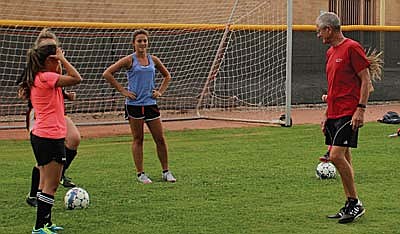 The Camp Verde girls soccer team has been getting back onto the field with two-a-days this week after a three day mini-camp last week. The Lady Cowboys start off their season on September 2 against Holbrook. VVN Photo by Greg Macafee

Camp Verde girls soccer looking to return to where their season ended last year....and then some.

Camp Verde Girls Soccer ended their season last year by losing to the eventual State Champions Blueridge in the state tournament. Losing seven seniors though doesn't seem like it will affect the Lady Cowboys too much as Head Coach Pat Allen looks to return his team back to the state tournament.