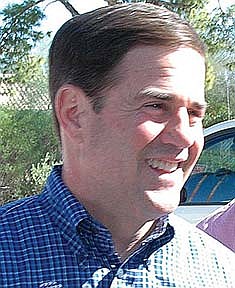 PHOENIX -- Gov. Doug Ducey said Thursday he intends to approve legislation cutting millions more in taxes even as he signed a budget that cuts millions of dollars from education and social programs."We're going to index the income tax to inflation,' Ducey said ahead of signing a new $9.1 billion spending plan which includes close to $500 million in cuts to existing programs. While the overall amount of the budget remains level, it adds funding for more prison beds even as it takes $99 million from the universities.