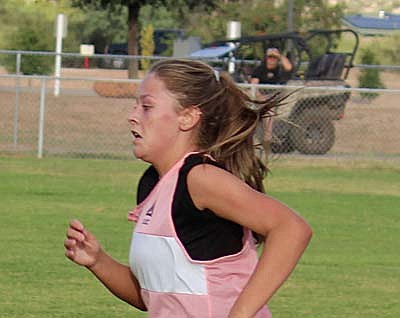 Raiven Alvey chases down a ball into the corner during the Alumni vs. Active game held this summer. Alvey was one of six players who score goals for the Cowboys Wednesday when they beat Holbrook 10-0. Aldon Teeters, Brina Church, Tyra Smith, Hailey Needham and Lupe Orta all added goals for the Cowboys in their first win of the season. VVN photo by Greg Macafee.

Camp Verde Cowboys gallop by Roadrunners 10-0 to start off season with first victory.

The Camp Verde Girls Soccer team started off their season Wednesday night traveling to face-off with the Holbrook Roadrunners. It was 5-0 within the first ten minutes of the game and the Cowboys cruised to their first win of the season.