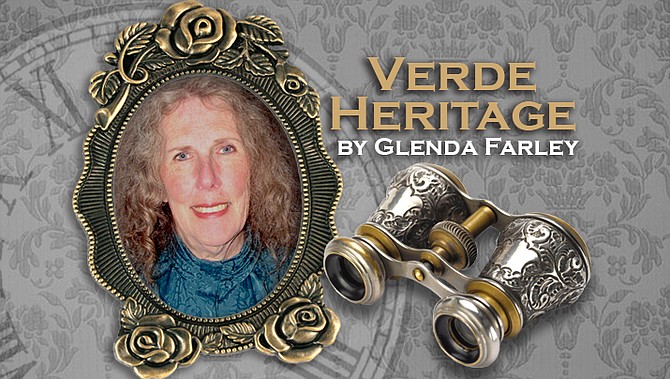 While the corporal slumbered in the baggage car, his prisoner escaped by jumping off the train.

"Larry Russell, who grew up beside Soldier Wash in Sedona, revisited his childhood home."

Bacon Rind Park was named in 1890 by two fishermen from Jerome.

Camp Funston, where Yavapai County recruits were trained during World War I, was identified as a source of the influenza epidemic.

The services of two Colorado River boatmen were needed to restore electric power to the Middle Verde area. In Oak Creek Canyon, the wooden bridge at Indian Gardens washed away.

The traditional gathering at the Montezuma Well Picnic Ground will be from 11 a.m. until 3 p.m. on Sunday, September 23, 2018.

After spending a day and night alone in the forest, Maudie finally gave up during the second day and decided to stay where she was, confident that her daddy would find her.

About 20 mining claims in Walnut Gulch had been idle since 1907 or 1908. Prescott men bought the property at a tax sale and plan to develop the mines.

The Cottonwood Progressive Association tried to revive the Chamber of Commerce.

Reports of progress from the Clear Creek, Beaver Creek, and Clarkdale schools and the new business district at Clarkdale.

More arrests may be made of aliens whose presence is considered to be dangerous to the peace and prosperity of the United States. Federal warrants were issued for 7 of the prisoners.

The new bridge at Sedona was practically completed by May 19, 1916.

Verde Heritage 1920: ARMY STATIONS AT MINE CAMPS WILL BE ENDED

Federal troops were stationed in the Verde District from September 26, 1918, until January of 1920

"Glowing tributes to the memory of Marcus Jay Lawrence marked speeches at Cottonwood yesterday," October 29, "as the Marcus Jay Lawrence Memorial Clinic was dedicated and formally opened in ceremonies attended by more than 300 residents of the Verde Valley and Northern Arizona."

"I left home on the 13th of last month, accompanied by my nephew, Jas. Michael, to look out a situation for my sheep, for the winter, which I had started 14 days previously. We went by way of Chino Valley, and took, what is called the new road, crossing Hell Canyon."

"That the L. M. Olden property, 2 miles south from Camp Verde, is to be rapidly developed, is no longer a prediction, but a fact. A company composed of a number of Arizona's most prominent business men and capitalists, including Mayor J. J. Cain, Eugene M. Barron, Edison Thacker, H. W. Thacker and R. Thacker and several other Jerome people, has been formed and called The Squaw Peak Copper and Mining Company. Enough money has already been subscribed to place the company on a substantial starting basis and in addition to this a limited number of organization interests are being offered at 15 cents per interest."

"Perfect weather and a good crowd of enthusiastic onlookers made the Lions Club rodeo and barbecue a very enjoyable affair in Camp Verde last weekend."

"Grading on the new railway from Cedar Glade to the Verde Valley is now under headway, and 18 miles are fully covered which will bring the work up to the point where a bridge will span the river. Several large outfits are located along the entire route to the above point, and every mile is occupied, from which will be learned the practical and energetic efforts that are being made by the L. J. Smith Construction company, to complete the railway at the earliest possible date."

Plans made 100 years ago by executives of the United Verde Extension Mining Company (U.V.X.) changed the Verde Valley forever. Their intention to build a smelter was announced on April 23, 1916, then the search for land began.

The Highway 89 Association was recently organized.

This cabin was located near the Verde River about 2 miles above Sycamore Creek and the Packard Ranch.

"That the Extension company has bought a number of farms south of Clarkdale is well known."

A story about a famous horse.