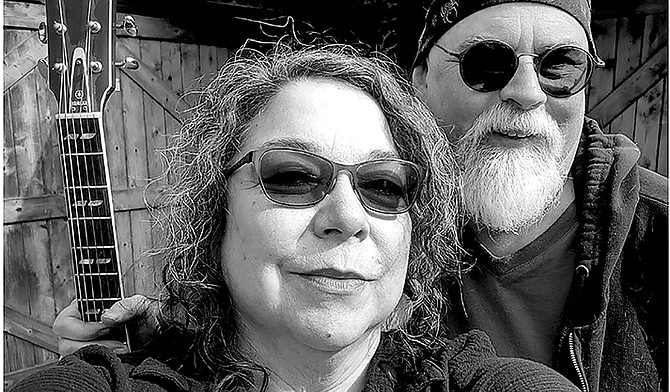 The Strip down is a musical duet based in Cottonwood AZ.
The band members, Dayna Soria-vocals and Richard Wawiernia (aka Art Gecko)-guitar and vocals are a couple that met in 2018, but their musical collaboration didn’t begin until 2020, during the early stages of the COVID pandemic.
Art, an art instructor at Yavapai College, is the bassist in the band Latex Johnny. He has been playing guitar since he was a young boy.
Dayna, began singing as a young child and continued throughout early adulthood in church and school choirs, performing solos, in ensembles and music troupes.
When the pandemic hit, due to Art’s band gigs being canceled, and quarantine, the two decided to combine their talents, and so the Strip Down was formed.
Their music consists of covers from music spanning the 60’s through into the 2000’s and includes music from the likes of: Pink Floyd, Radiohead, Barenaked Ladies, Tracey Chapman, Neil Young, Elton John and more.
Their name stems from their objective; which is to take a song, complicated or simple, ‘strip it down’ and rearrange it into a cohesive sound without losing the integrity of the original song.
You can catch their performances at various venues in the Verde Valley, such as Alcantara Vineyards, Belfry Brewery, Tantrum Wines, and other fine establishments.
Find them on their Facebook page at facebook.com/stripdownduo and follow for all upcoming events. They are available for any gatherings, public and private.
For booking information, contact them at theStripdownmusic@gmail.com